Today, June 1 — the first day of Pride Month — Netflix announced its decision to cancel its original series, Sense8, after two seasons. The announcement has been met with outrage, multiple petitions (including one that has reached over 100,000 signatures), and open opposition over social media.

Yo @netflix I heard you cancelled @sense8. You really wanna mess with the cluster? #Sense8 pic.twitter.com/1PZiNYOmml

I thought it was a joke at first. The show, which received critical acclaim for its unadulterated display of diversity in race, culture, gender, and sexual orientation, had its ratings increase significantly between the first and second season (79% in Season 1 to 86% in Season 2 on RottenTomatoes, for example — both seasons considered a significant “fresh” tomato). The choice to end it abruptly leaves me reeling and begging the question: When will television outlets — primetime, digital, or otherwise — recognize the importance of diversity in the 21st century?

For those who need a log line…well, it’s hard to summarize Sense8 in just a few sentences. Basically, take a cop from Chicago. A trans hacker from San Fransisco. A successful businesswoman from Seoul, South Korea. A pharmaceutical professional in India, a matatu driver in Nairobi, a DJ from Iceland, an actor from Mexico,  and a con man in Germany…and you get a group of “sensates,” or people equipped with the ability to essentially step into each other’s minds. These dynamic characters from all backgrounds can — if you’ll forgive the cliche — walk in each other’s shoes through “visiting” each other’s consciousnesses. Their relationships with each other as well as with those outside their “cluster” are full, fleshed out, and for the most part, healthy.

Take Nomi, a trans woman (played by a trans actress, Jamie Clayton!!!) from California, and her girlfriend, Amanita (Freema Agyeman of Doctor Who fame) — a woman of color. Consistently throughout both seasons, their relationship is grounded, balanced, and goes through natural stages.

And why is this so important?

Think about other romantic relationships between women in television. Buffy‘s Willow and Tara were torn apart by Tara’s death. The 100 killed off Lexa. Skins gave Naomi cancer and took her away from Emily, and, hell, Poussey was killed on Orange is the New Black for being gay and black while in a loving relationship despite her circumstances. Going way back, the leads in Xena: Warrior Princess weren’t allowed much more than subtext when it aired.

Basically, LGBT women don’t have the best track record for survival or happiness on television, even on Netflix shows that supposedly “revolutionize” television. And yet Nomi and Amanita prevailed. Nita empathized with Nomi’s impossible strife as a sensate despite not fully understanding the phenomenon. Nomi did everything she could to use her computer skills to protect Nita at all costs. They showed affection for each other unapologetically. They not only fit well together romantically, but mentally and emotionally, too. Even with her seven partners in crime, Nomi could not have gotten anywhere without the smarts, the passion, the counsel of her girlfriend. What’s better than that?

Take, also, Lito and his boyfriend Hernando. Their relationship went through more ups and downs than others in the show — in fact, Hernando doesn’t even know about Lito’s “extra” abilities where Nita does of Nomi’s — but their journey contributes to Lito’s character development and, consequently, the development of all the characters.

Lito’ love for Hernando inspires his gradual coming out and risking his career as an actor with a conservative fanbase. By the second season, he learns to accept himself despite feeling like an outsider, and this is a realization his fellow sensates come to terms with alongside him. His discovery of and eventual pride in his individuality is something he shares with his entire cluster as they go on their journey to discover what makes them different, why, and how to live with that otherness.

Nomi, specifically, provides him with advice and someone to talk to in Season 1 as someone who went through her own coming out process. This is just one example of the show’s ability to give proper, realistic attention to not only the romantic relationships, but the filial relationships and friendships on the show. 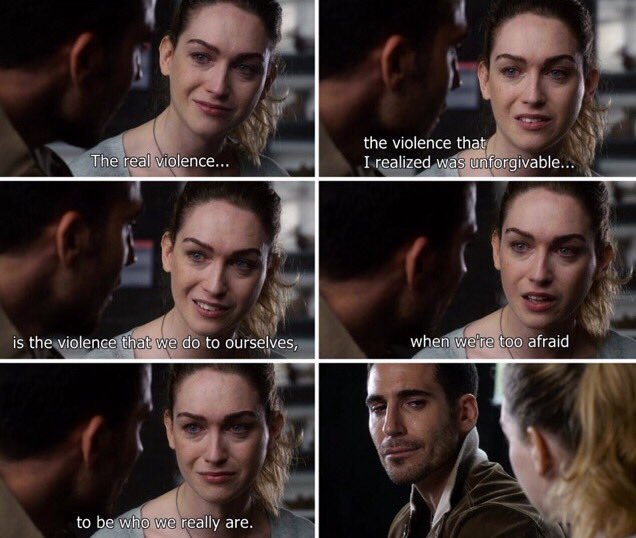 Each Sense8 character is unique with their own sets of strengths, weaknesses, and challenges, and only when they work together do they best realize their individual potential. Riley brings music and rhythm into the group dynamic to connect everyone through sound (see the iconic “What’s Up?” moment). Lito adds his hyperbolic tendencies and acting expertise to get his fellow sensates out of sticky situations. Wolfgang brings his cunning smarts, Sun her self-defense know-how and determination, Kala her medical knowledge, Nomi her technological prowess, Capheus his positivity, Will his compassionate and inquisitive nature. They are each their own person with their own lives to lead, but when they work together, they are virtually unstoppable.

The Wachowski siblings do an inspiring job of creating a sense of togetherness among 8 people whose distance from each other spans continents. Romances, of course, do blossom among the sensates, but more powerful to me is the friendship that transcends cultural and geographic boundaries. Most of all, Sense8 preaches a message of love and solidarity. “I’m not just me. I am also a we,” says Nomi says in the first season — speaking not only of the LGBTQ community, but of the group of people across the world who have changed her life, and she theirs.

To be fair, production costs for this show are high ($9 mil per episode this season, in fact). Actors, directors, and crew travel quite literally around the world to make the sensate experience as authentic as possible for the viewer. It seems Netflix didn’t see enough payoff.

Not enough payoff, apparently, in men and women of color and of various sexual orientations and genders expressing themselves freely and working together to better themselves and each other.

It just seems sad to me. I love Sense8 because it makes me feel less alone. I feel intimately connected to each character as if I myself am part of their “cluster.” There is so much potential for the characters and story to grow further. Ending the show so prematurely, without a resolution (on a cliffhanger, no less!) does a disservice to the show, its creators, and of course, the hundreds of thousands of fans around the world. Countless social media posts I’ve seen today and throughout the show’s run feature fans expressing how the show changed them for the better and broadened their horizons. Some have even said it’s saved their lives. Is Netflix willing to throw all that way so quickly?

One has to wonder why Netflix originals like 13 Reasons Why, which features little diversity and has been met with many negative reactions, are easily renewed while shows like Sense8 are not. Just a week ago, Netflix canceled The Get Down, another one of its originals, focused on a group of black teens during the rise of R&B in the 1970s. Netflix claimed high production costs as the reason for the choice, but the cancellation of two progressive shows — one highlighting influences of America’s past, the other highlighting the potential of the world’s future human race — struck Netflix binge-watchers hard. For a streaming service that has consistently picked up quirky, “edgy,” and, yes, diverse programming, this feels like a giant leap backwards.

If Netflix wants to alienate such a large demographic — students and professionals who want to come home after a long day of work or school and watch something that truly represents them and their struggles — then they are succeeding.

Whether or not fans’ cries are heard and Sense8 is picked up somewhere else, this says a lot about how Netflix is treating its most inclusive shows these days. Why pick up something so diverse, relatable, and powerful and decide not to continue with its rumored 5-season storyline?

I fear that Netflix will turn into its primetime predecessors, packing its instant streaming service with primarily generic white-led crime dramas and the occasional (also white-led) sci-fi show (Stranger Things, anyone?).

Netflix was becoming a platform for true diversity in media.

Where does it stand now?

I'm Jenna, a writer based in New York. I'm trying to hone and practice my writing while indulging in nerdy musings along the way. View all posts by jennawritesthings